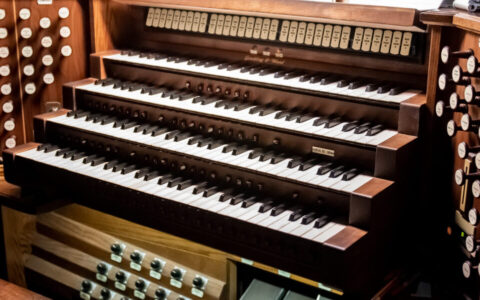 Music is an important part of Anglican worship. The organist and the choir play key roles in services.

Since its founding in 1805, music has played an integral role in the worship life of Christ Church Cathedral. A cursory reading of old vestry minutes reveals much time and energy and resources spent in purchasing and importing organs, hiring musicians, and training various choirs.

Jarrett joined the staff at Christ Church Cathedral in August of 2006. His primary responsibilities include playing the organ, directing the choir, and overseeing the concert series. In addition he oversees the Webcast along with other technical duties and produces service leaflets, newsletters, and most of the printed material created for the cathedral. He is also on the Diocesan Liturgy Commission and is active as an officer in the local chapter of the American Guild of Organists.

He holds a B.Mus. from Houghton College in Houghton, New York where he studied with John Chappell Stowe and others. He studied with Russell Saunders briefly at the Eastman School of Music and went on to earn a M.Mus from the Indiana University School of Music where he studied organ with Larry Smith and Improvisation with Marilyn Keiser. During graduate school he served as the organ scholar at St. Paul’s Episcopal Church in Indianapolis under the mentorship of Frank Boles.

He has led an active concert career while serving Episcopal parishes in Lafayette, IN and Durham, NC., He was the Assistant Organist at St Mark’s Cathedral in Shreveport, LA before moving to New Orleans.

Marc joined the Cathedral parish in 2015. He knew Mr. Follette as organist–choirmaster in Lafayette, Indiana, where he attended church; Marc served as occasional substitute organist. He first played the Cathedral organ for his niece’s wedding in 2005. When Marc and Judith bought a home New Orleans in 2006, Jarrett asked him to substitute during their visits to New Orleans. Marc became assistant organist when he and Judith moved permanently to New Orleans. Marc was a Professor of Chemistry at Cornell, and a Professor of Medicinal Chemistry in the College of Pharmacy at Purdue University, where he was also Associate Dean of Pharmacy, Nursing, and Health Sciences for 19 years. He has played piano since he was 6 years old and organ since he was 15.

At Christ Church Cathedral, we sing mostly in a traditional English fashion. Currently, the choir comprises approximately 20 adults, including professionals and volunteers with choral singing experience. The choir sings at Sunday services and holidays and at Choral Evensong periodically throughout the year. Each Advent, the choir offers the Festival of Nine Lessons & Carols in joyful anticipation of the Christmas season. In addition, they may sing at weddings or funerals.

The Cathedral is blessed with many musical instruments including two Steinway pianos, a harpsichord, handbells, and two pipe organs. The large cathedral instrument was built by the Goulding & Wood organ company of Indianapolis in 1994. While retaining many of the stops from previous organs, this project represented a complete reworking of old pipes and the addition of many new ones – resulting in a magnificent 94-rank instrument. Click here to hear Mr. Follette playing Apparition de l’église éternelle by Olivier Messiaen in a live concert recording.

New volunteer choir members are always encouraged to join the choir – please contact Mr. Jarrett Follette, the Director of Music for more information, or speak to any choir member.